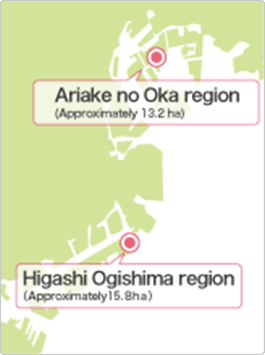 The Tokyo metropolitan area is the heart of Japan's government and economy, and a region where the country's population and functionality is highly centralized. The damage caused by the Great Hanshin (Kobe) earthquake has shown us that, in the event of a large-scale disaster, extensive damage that spans across prefectures can be expected.In preparation for such large-scale disasters, the first-stage decision of the Urban Regeneration Project, which calls for "upgrading basic wide-area disaster prevention bases in the Tokyo Bay waterfront area," was advanced in the Ariake no Oka and Higashi Ogishima regions for the realization of a central stage where regional disaster facilities across the Tokyo metropolitan area could collaborate and perform emergency relief activities.